Mehdi Ahmadian is J. Bernard Jones Chair in Mechanical Engineering at Virginia Tech, where he also holds the position of Director of Center for Vehicle Systems and Safety (CVeSS), and the Railway Technologies Laboratory (RTL).  Prior to joining Virginia Tech in 1995, Mehdi worked in the transportation industry for eight years, including serving as the Lead Design Engineer for steerable locomotive trucks (bogies) at General Electric Transportation System from 1993 – 1995.  He has authored four book chapters, more than 150 archival journal papers, and more than 400 conference publications and presentations, including numerous major keynote and plenary lectures, and invited presentations.  He holds 11 U.S. and international patents.

This study evaluates the stiffness and damping characteristics of low-profile magnetorheological (MR) fluid mounts (MRFM) to provide a better understanding of the vibration improvements offered by such mounts, as compared with conventional elastomeric mounts. It also aims at assessing how much of the mount’s performance is due to the MR fluid and how much is due to the elastomer and steel insert that is used in MRFM. The presentation will include the design, analysis, fabrication, and testing of a unique class of MRFM that is suitable for the isolation of sensitive machinery and sensors. The MR fluid is compressed (squeezed) in response to dynamic force applied to the mount. The test results are compared with conventional elastomeric (rubber) mounts of the same configuration as MRFM, to highlight the changes in stiffness and damping characteristics for frequencies ranging from 1 to 35 Hz.

Center of Excellence for Vibro-Acoustic Systems and Signal Processing

Ivana Kovacic is a Full Professor of Mechanics at the Faculty of Technical Sciences, University of Novi Sad, Serbia. She got her undergraduate degree in Mechanical Engineering in Mechanics and Mechanical Design at the Faculty of Technical Sciences of the University of Novi Sad. She got her Master and PhD degrees at the same faculty in Mechanics. She has passed through all the academic titles at the same faculty, starting from a teaching assistant to a full professor, which is a position she gained in 2014.

During her MSc studies, she was a fellow of the Ministry of Science of the Republic of Serbia. He was also a recipient of a scholarship from the Ministry of Science of the Republic of Serbia for her postdoctoral education in the Institute of Sound and Vibrations ISVR of the University of Southampton, UK in 2006. She was a Visiting Professor at the Institute of Sound and Vibration of the University of Southampton, the University of Sheffield, and the University of Strathclyde, UK. Since 2014, she has been an honorary foreign member of the Academy of Sciences and Arts of the Marche, Italy.She is the Head of the Center for Vibration-Acoustic Systems and Signal Processing CEVAS at her faculty, which received the status of the Center of Excellence from the highest Serbian research authorities - the National Council for Scientific and Technological Development in 2015 and in 2020 as well.

Her main expertise is related to non-linear oscillations, analytical investigations of their behaviour and associated phenomena. She has published more than 90 papers in the best relevant scientific journals and presented her results as a regular participant or introductory/keynote lecturer at numerous conferences and universities in her country and abroad.

Oscillators with Single-Term Power-Form Nonlinearities: from Solutions and Methods Proposed to Nonlinear Phenomena

This lecture is concerned with truly nonlinear oscillators, characterised by the odd, single-term power-form restoring force is, the power of which can be any non-negative real number. First, their characteristics with respect to a linear restoring force and a multi-term power-form restoring force that contains a linear term are pointed out. This included: a quasi-constant restoring force, which corresponds to the case when the power is zero, restoring force whose power is a fraction smaller or higher than unity, as well as a pure cubic restoring force. Second, the lecture focuses on free truly nonlinear conservative oscillators. An overview of a variety of special functions that one can use to define the period of their motion is given. This overview includes hyperbolic functions, gamma function, beta function, Pochhammer symbols, etc. Then, it is shown how one can use Lyapunov’s functions, Rosenberg’s Ateb functions and Jacobi elliptic functions to express the corresponding exact solution for motion. Finally, some of the phenomena arising in truly nonlinear oscillators are shown and discussed.

Some of these topics can be found in her recently published monograph:

Kovacic I., Nonlinear Oscillations: Exact Solutions and Their Approximations, Springer, 2020. 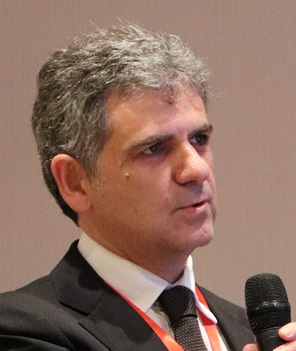 Walter Lacarbonara is a Professor of Nonlinear Dynamics at Sapienza University. During his graduate education he was awarded a MS in Structural Engineering (Sapienza University) and a MS in Engineering Mechanics (Virginia Tech, USA), and a PhD in Structural Engineering (Sapienza/Virginia Tech). His research interests cover nonlinear structural dynamics; asymptotic techniques; nonlinear control of vibrations; experimental nonlinear dynamics; dynamic stability of structures; modeling and dynamics of macro and (carbon nanotube/polymer)  nanocomposites. He is Editor in Chief of Nonlinear Dynamics, former Associate Editor for ASME Journal of Applied Mechanics, Journal of Vibration and Acoustics, Journal of Sound and Vibration. He served as Chair of the ASME Technical Committee on Multibody System and Nonlinear Dynamics, General co-Chair and technical program co-Chair  of the ASME 2015 (Boston, USA) and 2013 (Portland, USA) IDETC Conferences. He has organized over 10 international symposia/conference sessions and, very recently, the First and Second International Nonlinear Dynamics Conferences (NODYCON, www.nodycon.org/2019, www.nodycon.org/2021).

His research is supported by national and international sources (EOARD/AFOSR, NSF, European Commission, Italian Ministry of Science and Education). He has published over 250 papers and conference proceedings, 4 international patents (EU/USA/China), 24 book chapters, 6 co-edited Springer books and a single-authored book  (Nonlinear Structural Mechanics, Springer, NY, https://link.springer.com/book/10.1007/978-1-4419-1276-3) for which he received the 2013 Texty Award nomination by Springer US.

Hysteresis is a memory-dependent material nonlinearity that can be exhibited as interwire friction in wire ropes, inter-crystal friction in shape memory materials (SMA), frictional sliding between polymer crystals or chains and carbon nanotubes (CNT) in nanocomposite materials.

Previous works addressed SMA wire ropes hysteresis in nonlinear vibration absorbers and isolators as well as  nanoscale frictional phenomena  in  nanocomposite CNT/polymer materials. The main focus  of the talk is on high-performance  metamaterials featuring a periodic distribution of highly tunable damped oscillators with geometric and hysteresis nonlinearities. The nonlinear wavefrequencies and waveforms obtained via a perturbation technique  exhibit a high nonlinear tunability which is a key for advanced applications. David Herrin is Professor in Mechanical Engineering at the University of Kentucky.  He received both his B.S. and M.S. degrees from the University of Cincinnati and his Ph.D. from University of Kentucky.  His research specialization is acoustics and vibrations.  He directs the Vibro-Acoustics Consortium, a group of companies interested in the development and use of noise prediction technology, and is the author of over 100 journal and conference papers. He is a registered professional engineer and SAE Fellow.  He received the INCE-USA Outstanding Educator Award in 2019.

Vibratory and acoustic path analysis approaches will be reviewed and then demonstrated using real-world examples.  Path analysis approaches rely on measured transfer functions, and measured sources or responses.  For vibratory path analysis, the focus is commonly on determining forces that are hard to measure directly.  There are three commonly applied strategies: 1) classical transfer path, 2) pseudo force, and 3) blocked force analysis.  These three strategies will be surveyed, and then the usefulness of the blocked force approach will be illustrated on two industrial examples. Blocked forces are determined using correlated or uncorrelated assumptions for low or high frequencies, respectively.  Suggested guidelines for selecting the number of blocked forces will be detailed and demonstrated.  For acoustic path analysis, source contributions are more easily measured, and the emphasis is on predicting the acoustic response.  Acoustic transfer functions are commonly determined with the equipment turned off.  However, it will be shown that transfer functions can be measured using scale models in place of the equipment itself.  The volume velocity of each panel or patch can be measured on the operating equipment using a sound pressure – particle velocity sensor.  Using the transfer functions and particle velocity, the sound pressure level can be predicted prior to siting the equipment.  This method will be applied to determining the sound pressure level from a generator set and from air handlers in a bakery.